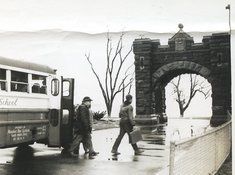 Upon entering the stone pillars of Westchester Day School, one drives along a meandering path through magnificent tall treetops, surrounded by lush foliage and lovely landscaping. Soon to appear before you are several school buildings with the focus of attention being drawn to a stately, Tudor-style mansion with turrets and distinctive burnt-orange brickwork. This building was the original residence of the Weatherbee family which was built on the Constable estate, occupying 26 acres of land bordering the Long Island Sound near Orienta Point in Mamaroneck. It is currently utilized for middle school classrooms, offices, the Library and the WDS Synagogue.

Westchester Day School opened its doors in September 1948 with an enrollment of 54 boys and girls in kindergarten through grade 4. S. Maurice Plotnick, a Cambridge-educated mathematician and Hebrew scholar from Maimonides Yeshiva in Boston was selected as headmaster. Mr. Plotnick established the tradition of education that promoted the highest standards in Judaic and General Studies, which emphasized the "Torah Im Derech Eretz" approach to learning. He was headmaster for over three decades until his official retirement in 1981.

"The Westchester Day School is the optimistic herald of a new era for our country. It is the most tangible symbol that American Jewry is vibrantly alive and shall continue to live. With the growth of this school, a strong and authentic generation will arise - one having that inner conviction and knowledge which alone can assure our vitality." - S.M. Plotnick, Headmaster, 1949

To understand Westchester Day School in a historical perspective, we need to return to 1947, at a time when there was no Jewish elementary school in Westchester. A group of individuals met with Rabbi David Golovensky, the spiritual leader of Temple Beth El in New Rochelle and determined there was a need for establishing an institution where Jewish children could receive a superior education in both Judaic & General Studies. Mr. Mortimer Propp, a real estate investor interested in Jewish causes, was called in as an advisor. It can be said that “the rest is history.”

At Mr. Propp’s suggestion, the group purchased 26 acres of land as well as the buildings and furnishings from the Weatherbee family. The Westchester Day School was established under the name of the Westchester Religious Institute. However, the history of the property dates back to 1661 when John Richbell purchased it from the Siwanoy Indians as part of a larger parcel of land.

After Richbell died, his widow, Ann, sold most of the property to Caleb Heathcote, with the land passing on to Heathcote’s surviving daughters and their husbands. In 1848 the land was subdivided, large sections were sold, and the land changed hands several times. Then, in 1884, Amy Henrietta Constable Weatherbee, became the owner of the property. She and her husband owned the fashionable Fifth Avenue emporium, Arnold Constable, that until 1971 had a branch store on Main Street in New Rochelle. This Constable Weatherbee estate was to become the Westchester Day School.


In 1965, to accommodate the growing student body, a new wing was erected which contained eight additional classrooms, a library, science lab, cafeteria and teachers’ lounge. This wing is known as Wolfson Hall in honor of Solomon and Nellie Wolfson of England.   Bette Wolfson Schapiro and her husband, Harold, whose son and grandsons attended WDS, provided the major gift for the building. Sir Isaac Wolfson, the Anglo-Jewish leader and philanthropist and brother of Bette, attended the dedication of Wolfson Hall, together with Lord Caradon, then British Ambassador, to the U.N.

The vision that inspired the founders of Westchester Day School continues to inspire today’s generation. The school continues to offer excellence in both its Judaic and General Studies. In addition, kindness, empathy and a commitment to country and community are attributes the school endeavors to develop in the students who attend this very fine institution.

Westchester Day School is a Modern Orthodox, co-educational, dual-curriculum, toddler to 8th grade Jewish school that inspires and educates our students in their own way to value menschlichkeit, mitzvot, and lifelong learning.